Search for a company in Garden Route
Advertisment

Filter Things To Do by Type

Filter Things To Do by Type 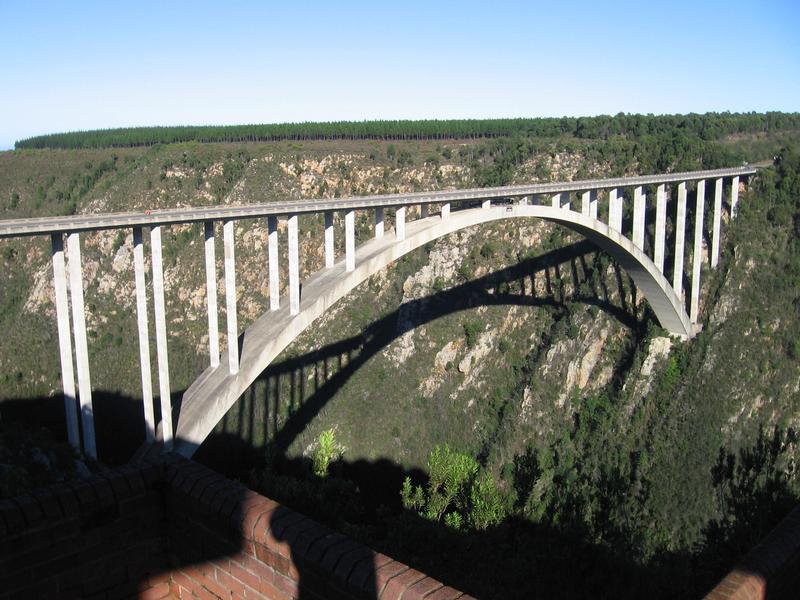 Bungee Jumping at the Bloukrans Bridge

Along South Africa’s Garden Route near the Tsitsikamma Forest Village, some 40km east of Plettenberg Bay you will find the world’s highest single span arch bridge. The spectacular Bloukrans bridge sits at over 200m above the raging Bloukrans river and commands some pretty impressive views over the valley below. So surely there can be no better way to enjoy these spectacular views than to throw yourself off the top of the bridge into the rushing torrent of the Bloukrans river below!

This is the ultimate thrill! The Bloukrans Bungee Jump , run successfully by Face Adrenalin since 1997, is the highest Bungee Jump from a bridge in the world as well as the world’s highest natural bungee jump. Once you have chosen to take the plunge, you will be secured in a full body harness and will walk along a specially designed catwalk (216m long), which is suspended beneath the road surface, which will then lead you to the top of the arch: 216 meters above the Bloukrans River. Once at the top you will be given final instructions by highly experienced staff, a countdown and off you go! This is certainly not for the feint-hearted but will give definitely give you an adrenalin rush that will take some beating!

Face Adrenalin introduced bungee jumping to the African continent in 1990 when the Bloukrans River Bridge was the first bridge to be ‘bungee jumped off’ in Africa! The rest they say is history, and in the more than 20 years of giving adventure seekers the thrill of a life time they have a 100% safety record upon which they pride themselves.

Face Adrenalin and the Bloukrans Bungee Jump are open daily from 9am – 5pm and prices are R690 for bungee jumping and from R100 for the bridgewalk . Please contact the team at Face Adrenalin using the enquiry form below for more information and confirmation of prices.

Login to create your guides for Garden Route.

Add to My Guide

Create & Share your Guide to Garden Route with friends and family!

Add your recommended places to visit by browsing the website and pressing the icon.

Create your own guide of favourite 'must see' places

Earn your Local Expert badge by Sharing your guides with others

We Are Part of the My Guide Network!

My Guide Garden Route is part of the global My Guide Network of Online & Mobile travel guides.

We are now in 120+ Destinations and Growing. If you are interested in becoming a local travel partner and would like to find out more then click for more info about our Website Business Opportunity.